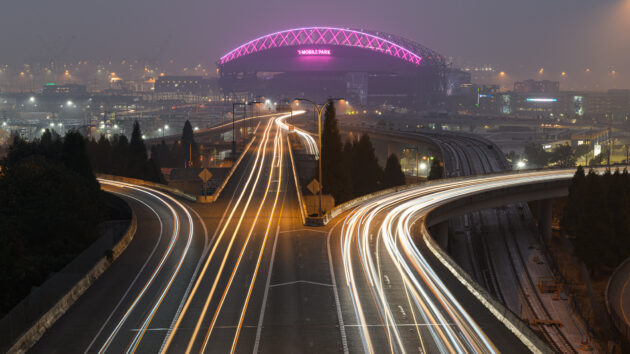 If you’ve been disappointed with the accuracy of snow forecasting in the Pacific Northwest, you’re really not going to like what our region can do with wildfire smoke predictions.

For reasons seemingly as numerous as current air pollution readings, guessing at how wildfire smoke will behave is tricky business.

“Even if you have a great smoke model and get the weather correct, you have to deal with all the unknowns on where the fires are, which ones are active and how much smoke they’re creating,” said Farren Herron-Thorpe, a modeling and emissions inventory scientist with the Department of Ecology and a contributor to the Washington Smoke blog.

The West Coast is being smothered by wildfire smoke coming from dozens of fires burning in Washington, Oregon and California. Weather and wildfire conditions have collided in such a way that it’s driven the level of tiny airborne pollutants to levels so high that machines used to measure them are returning error messages. Day after day, public agencies are warning of “unhealthy” and “very unhealthy” conditions for everyone.

Many parts of W. WA saw a little rain overnight. It felt good, but it didn't help that much with particulate pollution levels. Air quality is still in the very unhealthy to hazardous range. Keep an eye on our monitors and continue to protect yourself – https://t.co/4EfNwND7Fg pic.twitter.com/NROSQNLRxT

After five days of nasty air in the Puget Sound region, residents went to bed Sunday evening comforted by predictions that the air would clear on Monday. But the models were off and experts offered much grimmer forecasts stretching through Friday.

Smoke models are not probabilistic like weather forecasts are — no one talks about a 20% likelihood of dangerously smokey skies like they do, say, a 75% chance of rain. Accurate smoke forecasts only go out about a day. The forecasts don’t have a way to predict the changes in wildfire behavior, but assume the fires stay about the same day after day. There isn’t good smoke monitoring at different elevations in the atmosphere or in widespread geographic locations, particularly rural areas. Using satellite images, clouds can mask smoke levels. The systems set up to run smoke models lack the computational heft to crunch all of the needed data to make detailed predictions in a timely manner. Smoke can change the weather, which effects the smoke, creating additional complications.

That last factor is part of what goofed up the predictions that the smoke would clear Monday. The smoke was so thick that it cooled the temperatures by about 10 degrees, which in turn reduced the vertical mixing of the air or the wind that occurs when the earth’s surface is heated.

Smoke forecasting is complicated. But while people along the West Coast right now might feel like they can’t stand the smoky conditions for another moment, historically at least, smoke-filled days are not that frequent in the region. There haven’t been big investments in building a robust system for forecasting smoke on par with what’s available for predicting weather.

Of course that could shift as the planet keeps warming. University of Washington researchers studying wildfires say that the bigger fire events that we’ve been experiencing in recent years are consistent with predictions about how the climate crisis will affect the region.

For now, a network of academic and government agencies run models to make their best guesses about how the smoke will behave. That includes the National Oceanic and Atmospheric Administration’s High Resolution Rapid Refresh-Smoke (HRRR) or HRRR-Smoke (pronounced her-smoke), Washington State University’s AIRPACT forecasting, UW research and Canada’s FireWork forecasts.

The smoke predictions require “a lot of personal or human interpretation of the information,” said Herron-Thorpe, “whereas a weather model is really streamlined computationally. It’s automatic. The smoke forecast stuff, it needs to be digested and manually looked at to see if it passes the ‘stupid test.’”

That is to say, the researchers need to validate what the models are showing them to make sure it matches reality. The solution to better smoke forecasting is, perhaps ironically, moving more toward digitization, Herron-Thorpe said. Instead of building better models for wildfire smoke, it might make more sense to move toward AI or machine learning to layer in information on how fires behave and nuanced interactions between the particles and weather.

“Machine learning could really be the way we need to go,” he said, “rather than following the same paradigm as the weather model.”