Boeing and airline stocks soar higher, thanks to billions of dollars in promised aid 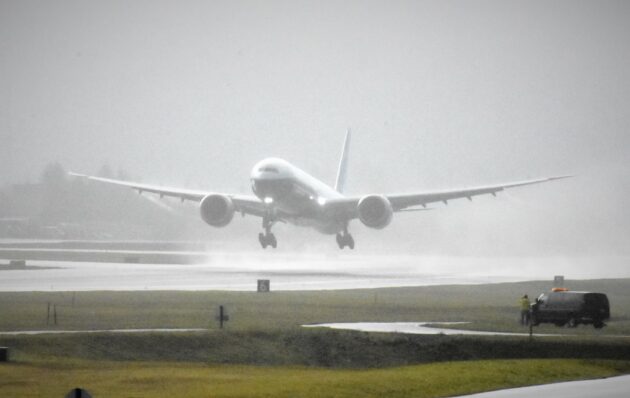 Even as Boeing begins a 14-day production shutdown in the Puget Sound due to the coronavirus outbreak, the aerospace giant is in line for a financial booster shot, thanks to provisions in the $2 trillion relief package passed by the Senate.

Boeing’s stock rose by more than 30% in midday trading today. Airline stocks rose as well, thanks to $50 billion in promised loans and grants for passenger airlines, and another $8 billion for cargo carriers.

The Senate bill doesn’t specifically call out Boeing, but it does set aside $17 billion in loans for businesses that are considered “critical to maintaining national security.” Sources told The Washington Post that this provision was meant to cover Boeing’s needs, although other companies could be eligible for some of that aid.

That $17 billion by itself doesn’t fully address Boeing’s request for $60 billion in assistance, but other sources of funding — public as well as private — could help fill the gap.

Boeing CEO David Calhoun signaled that the company had other options for getting through its current troubles during a Fox News interview on Tuesday. When Calhoun was asked about giving the federal government an equity stake in the company, in exchange for receiving assistance, he said he didn’t care for the idea.

“If they force it, we just look at all the other options, and we’ve got plenty of them,” Calhoun said.

Boeing has been dealing not only with the impacts of the virus outbreak — ranging from sick employees to air travel restrictions — but also with the continued worldwide grounding of its 737 MAX airplanes. Sources have told Reuters that Boeing is currently planning to restart 737 MAX production in May, and is targeting the fleet’s return to service at midyear.

That all depends on how the outbreak develops, as well as how quickly regulators at the Federal Aviation Administration and its counterparts around the world sign off on the fixes that Boeing has made in the wake of two catastrophic 737 MAX crashes.