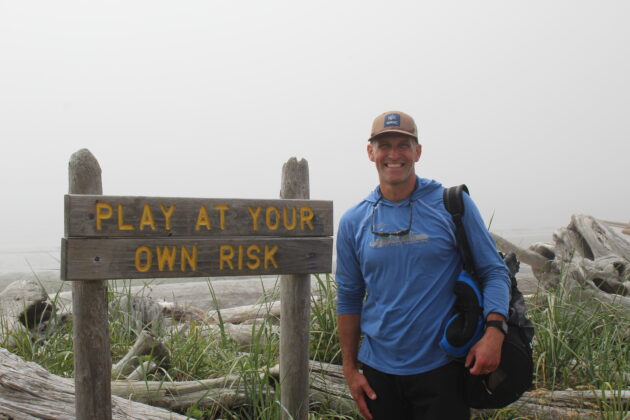 As the new director of the grants program at the Washington Research Foundation, David Shoultz joins at a unique time for an organization dedicated to accelerating innovation in science and technology in the state.

As research institutions and companies throughout Washington place a priority on the response to COVID-19, WRF has received a number of grant applications that run the full gamut of ideas and technologies related to the pandemic, including digital health apps, vaccines, diagnostics, and more.

“The diversity of COVID-19 related applications speaks to the creativity, ingenuity, and resourcefulness of researchers working at our different research institutes in Washington state,” said Shoultz, who is our latest Geek of the Week.

But as compelling as the response has been, WRF doesn’t want grant applicants contorting their research focus just to address a COVID-19 angle.

“We are still just as interested in applications addressing Parkinson’s disease, clean energy, surgical innovations, or wearables for people with visual disability,” Shoultz said. “We continue to take a global and long-term view in encouraging and considering grant applications on a variety of topics with potential commercial application.”

Originally from Hawaii, Shoultz moved to the Seattle area in 1986 to attend the University of Washington, where he ultimately earned his PhD from the School of Public Health & Community Medicine in 1997. He later completed his MBA at the Albers School of Business & Economics at Seattle University.

An epidemiologist and longtime affiliate assistant professor at the UW with a background in global health, Shoultz spent time at the Bill & Melinda Gates Foundation, PATH and the Geneva Foundation.

When it comes to epidemics caused by viruses, he’s struck by the humility of even the most accomplished experts he has met along the way.

“We need to recognize how little we still know about the COVID-19 virus, how difficult it is to develop and distribute a new vaccine, and that even the best scientists are going to get important things wrong along the way,” Shoultz said. “We also have to acknowledge that we should have been better prepared as a country.”

WRF is currently accepting applications for its Postdoctoral Fellowship through June 21. Each year, the organization funds at least 10 new postdoctoral researchers at eligible institutions in Washington state working in an array of STEM-related fields. As an example, Shoultz points to the “interesting, innovative, and important” research of Dr. Rossana Colon-Thillet on novel therapeutics against Hepatitis B virus (HBV) at the Fred Hutchinson Cancer Research Center.

“I think that we can all appreciate the value of new anti-viral medications right now,” he said.

Beyond science and tech, Shoultz is passionate about being in the mountains and waters of the Pacific Northwest. When not at work, he can be found skiing or snowboarding, sailing, or swimming in Lake Washington. He’s married to a pediatrician and said he’s fortunate to have two adult sons who still live and work in the PNW.

Learn more about this week’s Geek of the Week, David Shoultz:

What do you do, and why do you do it? I just joined the Washington Research Foundation to lead our grants program. We’re focused on accelerating innovation in the sciences and technology development in our state. We concentrate our funding on research that addresses important needs in healthcare and other critical areas that will have positive outcomes in Washington and beyond. I’ve worked in the private sector, for other foundations (including the Bill & Melinda Gates Foundation), and at non-profits (including PATH and the Geneva Foundation). In all of these roles, I’ve focused on product development because I believe that products (for instance, new drugs, vaccines, and diagnostics) are how we make science and technology relevant and meaningful in ways that help real people meet needs and solve problems.

What’s the single most important thing people should know about your field? Many people tend to think of philanthropy and grants as “charity,” but I don’t. I see grants as being a form of investment that we make based on a clear mission and strategy, rigorous criteria, and the expectation of a return (albeit most often a non-financial return).

Where do you find your inspiration? My inspiration comes from the gap between “what is” and “what can be.” It’s one of the most important things that I picked up from Bill and Melinda Gates during the time that I worked at the Gates Foundation. Technology is necessary but not sufficient for bridging that gap. And that leads right back to why I do what I do at WRF!

What’s the one piece of technology you couldn’t live without, and why? My Samsung Galaxy Buds wireless earbuds. They were a gift last Christmas from my wife. Whether I’m running, biking, or just on a phone call, I love not having to deal with the mess of tangled wires. For exercising, it helps that they seem to be pretty sweat-resistant, as well. And I like the opalescent color, as well.

What’s your workspace like, and why does it work for you? Well … my real workspace is at the WRF offices on Lake Union, and I’ve yet to work there. My entire interview and hiring process has taken place virtually (a first for me), and I can’t wait to get to work from our offices and with our incredible team of people at WRF. For now, I’m working from home like so many other people in Washington state and making the most of it. But I am someone who really believes in the value of working together in-person and benefiting from all of the essential intangibles that brings; remote working will always be second-best for me.

In taking this picture of my home office setup, I noticed that I have a Spanish Word-of-the-Day calendar still on my desk from last year with the top entry reading, “Estamos bajo la sombrilla” (“We are under the parasol.”) It’s pretty apt for how I’m feeling at this point in our response to the COVID-19 epidemic. I am definitely ready to come out from under “la sombrilla” and get back to “la oficina”!

Your best tip or trick for managing everyday work and life. (Help us out, we need it.) Outdoor exercise. I don’t mind the occasional trip to the gym, but I depend on getting outside to ski, swim, bike, or run five or six days a week. I find open-water swimming especially relaxing. I really like the single-minded focus that back country skiing requires. I believe that it’s important and valuable to step away from the built environment, to be challenged and to even be uncomfortable. I’m a big fan of Type 2 fun. (Not familiar with the Three Types of Fun? Here’s a primer.)

Mac, Windows or Linux? Windows, I guess. I will admit that the cloud-based Office 365 platform is growing on me for its functionality.

Kirk, Picard, or Janeway? Oh, this one is easy: Kirk. All day, every day. I grew up on the original Star Trek series.

If someone gave me $1 million to launch a startup, I would … put it into a company focusing on the diagnosis and treatment of respiratory viral infections (including SARS-CoV-2) based on what we know about the role of cytokines in responding to viral infections.

I once waited in line for … hours to get over the border from British Columbia to Washington state because the Border Patrol agents were looking for contraband agricultural products coming from the Whistler-Blackcomb area and I had skis on the roof rack of my car. Whatever they were looking for, I didn’t have it!

Your role models: Bill Gates, Sr. He was one of the three founders of WRF back in 1981 and I had the chance be around the Gates Foundation with him from 2009 to 2014. He always demonstrated a fundamental belief in the importance, necessity, and value of giving back that has already left an enormous legacy in the Pacific Northwest. He is one of the best role models I know for the simple idea of working to leave the world a better place than when you found it.

Greatest game in history: The U.S. men’s Olympic hockey victory over Finland in 1980. It was a turning point in modern American history and a monumental moment in 20th century sports.

Best gadget ever: It apparently wasn’t the Palm Pilot Vx that I thought was going to change my life at the time.

Favorite cause: Sail Sand Point, Seattle’s community boating center. I’m on the board.

Most important technology of 2020: Zoom and other virtual conferencing platforms.

Most important technology of 2022: A safe and effective COVID-19 vaccine that is available globally, including to people living in low-income countries.