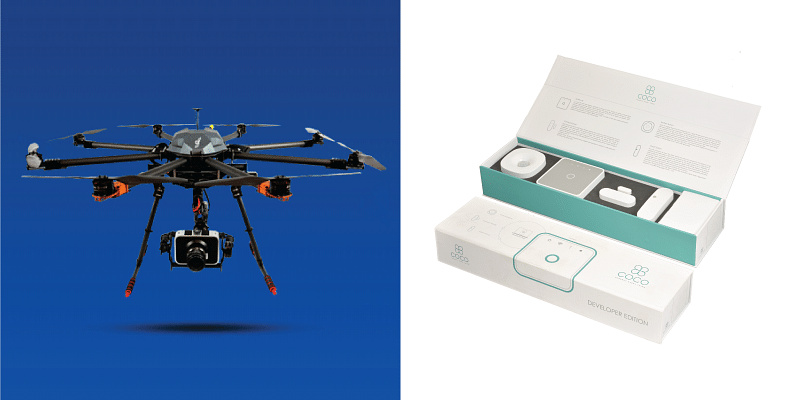 Today, even in a developing country like India, which is marked with technology and infrastructural deficit, IoT is transforming almost every industry one can think of -- from agriculture to transportation to consumer electronics. Thanks to the obvious benefits of IoT - improved monitoring, better productivity, real-time connectivity and monitoring, enhanced security, operational efficiency – businesses are increasingly building and integrating IoT platforms and devices to align faster to their growth goals. In fact, the global IoT Market is expected to grow at a CAGR of around 10.2 percent. The market is expected to grow from $916.9 billion in 2020 to $1994.3 billion in 2028. Meeting this industry demand for unique IoT solutions, while also furthering the growth of the IoT sector are new-age deeptech startups like Elear Solutions and Detect Technologies, which are part of the Qualcomm Design in India Challenge 2019 cohort.

A startup that is bringing visionary connected experiences, Elear Solutions, is developing a unique P2P platform called COCO that intersects areas of IoT/Smart Home and 5G intelligence. A software stack that is three years in the making, COCO is a disruptive concept that turns around the widely prevalent concept of a server‐client architecture to a completely peer‐to‐peer architecture to enable IoT connectivity. Ashish says, “The interoperable platform enables app and device manufacturers to design for privacy and is applicable to the burgeoning Internet of Things (IoT) market and beyond.” Currently in a pre-launch stage, Elear is already in talks with four service providers with millions of subscribers. “COCO is built on the tenets of data privacy, data security, interoperability and ease of use. We are excited to partner with Qualcomm in bringing COCO to the market.”

The startup is part of the QDIC 2019 cohort. But, for Elear Solutions’ CEO Ashish Bajaj, the relationship with Qualcomm India began as its first employee in India. “I had joined their Multimedia DSP Firmware team back in 2004. Even then, it had a wonderful startup culture that fostered innovation and encouraged risk-taking.”

15 years later, Ashish joined his cousin Manav’s startup as its CEO, Ashish says, “Qualcomm has always been my home. So having Elear Solutions get incubated there felt very natural. Also, just like Qualcomm, Elear Solutions share the same excitement about the advancements in Edge Intelligence, IoT, and 5G. The only difference is that while Qualcomm focuses on the hardware platform, Elear focuses on the software platform layers and how the developer community can combine the two to create consumer products.”

Ashish says the programme not only helped Elear enhance the technical aspects of COCO, but also helped to focus on the business side of things.

"At QDIC, being part of the various business focused workshops led by Anthill ventures not only helped to focus on how we could generate business value, but also message our value proposition precisely and succinctly.”

In addition to launching the COCO Edge AI-enabled Smart Home Platform for Telcos, the next few months will see the startup is launching its Developer Edition kit and a whole lot of new products this year which includes a 4G Enabled OBD-II dongle that connects into the car and interoperates with the COCO Smart Home.

Two of its key industry winning products have been GUMPS and Noctua. GUMPS is one of its kind long range sensors to monitor the health of high-temperature pipelines on a continuous basis. It not only monitors percentage cross-sectional area loss but also estimates failure based on rate of degradation. Noctua is an autonomous unmanned aerial system to acquire visual, thermal, and ultrasonic data from high-rise or hard-to-reach assets. It has conducted more than 1,800 hours of flight. Noctua’s capabilities have enabled it to carve out numerous use cases across industries.

Co-founder Karthik R, says, “One of the things we wanted to particularly explore is how can leverage the Qualcomm SOCs and custom develop effective intelligence on the chip itself and also explore how we could leverage Qualcomm Vision Intelligence Platform.”

Purpose-built with powerful image processing and machine learning for smart camera products in the consumer and enterprise IoT spaces, the platform is designed to provide superior image processing together with enhanced Artificial Intelligence (AI) capabilities for smart camera products in a variety of IoT devices. “For us what it meant was the possibility of working on infusing enhanced vision intelligence features to Noctua. Instead of pre-programming a flight, we wanted to work on building intelligence so that Noctua can make smart decision real-time based on whatever it is capturing during the flight. Also, we were exploring how we could get a 360 degree of video in a single flight instead of multiple flights.” Being a pioneering effort, the Karthik says they have made significant strides.

“But we think it is still work in progress and will take more effort and time to reach where we want to. That said, Qualcomm’s support with respect to how we can leverage its platforms has been instrumental in helping us get to where we are today towards achieving that vision.”

QDIC team also helped DeTecT with connections to their teams based in the US that had worked on drone technologies in the past and thereby built on their learnings. The team also benefited from the support they received from QDIC with respect to Electronics Technicians Association (ETA) certification. “They guided through the certification process and helped us with the right connections.

Having spent a few initial years in building products that are robust and industrially ready, 2019 saw DeTecT completing GUMPS and Noctua for commercial use. The year also saw the startup launching a new product -T-Pulse and expanding its geographical footprint to the US. 2020 will see the startup further its R&D efforts while also focusing on international expansion.

Applications are now open for Qualcomm Design in India Challenge 2020

The Qualcomm Design in India Challenge is India’s longest-running wireless hardware and IoT startup incubation programme in India. With its fifth edition, Qualcomm will continue to spur the domestic hardware ecosystem, an effort that began in 2016. Over the past four years, QDIP has received 1134 applications, of which 53 startups were brought into the programme. These startups have developed products and technologies in the areas of robotics and drones, smart-infra, machine learning, wearables, automotive, med-tech, agri-tech and fin-tech. Of the 53, 11 startups have raised series A funding and more than 22 have launched products commercially. Collectively, they have filed over 85 patents.

As in the past, startups that are a part of the 2020 cohort will get access to different kinds of Qualcomm evaluation kits and development boards, along with the tools to optimise camera, audio and display. They will also get access to the Qualcomm Innovation Lab in Bengaluru which contains necessary tools and equipment to enable the startups to design, layout, calibrate and bring up rapid prototyping and innovative product designs, Apart from this, they will have access to Qualcomm tech leaders and mentors, accelerator program services through Qualcomm’s programme partner, patent filing incentive (up to INR 3.2L), a INR 3.2L incentive for prototyping during incubation and a chance to win part of the INR 1.5Cr total prize money at the end of the eight month incubation period.

Apply for the Qualcomm Design in India Challenge 2020 today.