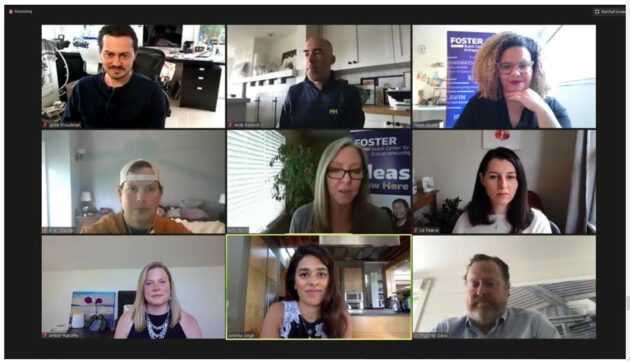 Student entrepreneurs competing in the Dempsey Startup Competition made their pitches Thursday to a panel of judges connected by Zoom. (UW Image)

Ryan Yousefian had an advantage in the 2020 Dempsey Startup Competition for student entrepreneurs in the Pacific Northwest.

The University of Washington student developed an innovative technology to solve a problem that he personally experienced: obstructive sleep apnea. The condition causes people to repeatedly stop breathing while they sleep, and can result in high blood pressure, depression, difficulty concentrating, headaches and other harmful effects.

Yousefian suffered from sleep apnea when he was younger and received treatment from his dad, a Bellevue, Wash.-based orthodontist. In 2017 he co-founded ApnoMed, a startup that sells a device to correct the disorder without negative side effects associated with existing technologies.

Today ApnoMed was awarded the $25,000 Herbert B. Jones Foundation grand prize after Yousefian successfully pitched his idea to a panel of judges. Because of the coronavirus pandemic, the event was conducted remotely and the prizes were announced via a pre-recorded awards presentation shared today on YouTube.

“Our long-term vision for this business is to be the Invisalign of sleep-apnea treatment,” Yousefian told judges during his pitch on Thursday, citing the company synonymous with bracketless braces.

Now in its 23rd year, Dempsey Startup is organized by the UW’s Buerk Center for Entrepreneurship. The center gave away $77,500 in prizes this year, bringing the lifetime total awarded to $1.5 million. The Dempsey Startup is open to student entrepreneurs from Washington, Oregon, Idaho, British Columbia and Alaska and 97 teams entered the contest.

Given the competition’s shift online, the top 30 teams each submitted a one-minute video pitch and gave short, live pitches virtually for judges. Those startups were whittled down to 16 contenders, including students from the UW, Seattle University and the University of Alaska-Fairbanks. Via video conference on Thursday afternoon, the final four startups — all of whom are from the UW — made their pitches and answered judges’ questions during a live-streamed event.

Yousefian explained how other devices to used to correct sleep apnea force a user’s jaw into an under bite position, potentially causing jaw pain, a permanent shift in their bit, and movement of teeth. Another treatment approach uses a CPAP (Continuous Positive Airway Pressure) machine that requires a user to wear a mask while sleeping. The machine can be noisy and disruptive, and many patients give up on the therapy.

“People are dumping millions of dollars in this space, and frankly they’re poor products,” Yousefian said.

ApnoMed is selling a device that’s something like a high-tech night guard that triggers a response in users so they naturally move their jaw position. The company has FDA approval for its device and offers training and certification to dental providers. Yousefian cited the years he spent in the presence of his father’s practice, giving him insight into sales strategies in the sector.

This isn’t ApnoMed’s first win. In March, the company competed in the 2020 Hollomon Health Innovation Challenge, which is also hosted by the Buerk Center, and took home $17,500 and the grand prize.

The top prizes today were awarded based on the startup team’s dynamics and quality, product fit with customers, the viability of their business model, and the quality of their presentation, data and ability to field questions.

Here’s a rundown of the top winners from this year’s event, and here’s information on the additional prizes awarded by the competition:

Bluebox Labs adds “Tesla-like” software and computer vision capabilities to any existing car with a $200 device. The company is targeting working drivers, including Lyft and Uber and delivery drivers. Their software provides drivers data on their miles driven for work, diagnostics on needed repairs and servicing, and video footage from the dash camera. The prize was sponsored by WRF Capital.

The 2050 Company creates healthy food products that reduce waste in the food industry. Their first product, The 2050 Smoothie, is a powdered smoothie made from rescued produce and is prepared using a blender in less than a minute. The prize was sponsored by BECU. The startup also won the $2,500 Thatcher & Shannon Davis Best Consumer Product Idea.

The 2050 Company recently took first place and a $10,000 prize at the Northwest Entrepreneur Competition, and was previously covered by GeekWire.

Spira is an AI service for telehealth that allows patients to record and screen their respiratory symptoms using a smartphone. Healthcare providers use the platform to better inform doctors providing telehealth about a patient’s condition, saving time for physicians. The prize was sponsored by Friends of the Dempsey Startup. Spira also received the $2,500 Premera Best Health & Wellness Impact Idea prize.

The company in March won $7,500 in prizes at the 2020 Hollomon Health Innovation Challenge and Spira co-founder Nikolas Ioannou was a GeekWire Geek of the Week last November.