[TechSparks 2020] Zoho's Sridhar Vembu on batting for a 'mindset that's global, but rooted in tradition' 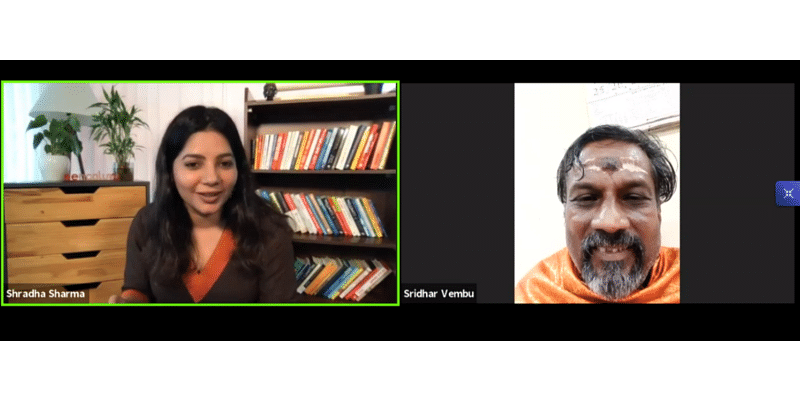 In a freewheeeling conversation that spanned his personal life philosophies, spiritualism, and minimalism, Sridhar Vembu, Founder and CEO of Zoho, said he believed that technology and his Indian roots were not in contradiction with each other; rather, they were complementary.

Sridhar was speaking on Day 1 of TechSparks, YourStory's flagship event and India's largest and most influential tech-entrepreneurship conference that has gone virtual for its 11th edition.

Sridhar moved to a small village in Tamil Nadu after working in Silicon Valley and found many naysayers, people who told him that he couldn't build a tech ecosystem there. But he continued to believe in the philosophy of "transnational localism" - thinking global and building local.

Fully aware that no one could predict the future, he kept his head down and decided to play the long-term game of building a quality tech startup in rural India, using the best minds in villages around him, and staying focused on his resolve.

"I think of it this way: we are not in the technology business, but are building culture and human capital," Sridhar said, in a conversation with YourStory CEO and Founder Shradha Sharma.

Sridhar Vembu has dedicated himself to reviving Indian villages by taking Zoho's software engineers back to their homes. Village-based engineers will collaborate with global teams to build world-class software.

It is well-known that Sridhar loves, respects, and values his roots and the Indian culture. Creating and nurturing engineering talent in rural regions is a mission that is close to his heart.

"I firmly believe that we have to build from the ground up - rather than bringing people to the cities to build tech, we have to take tech to their doorsteps to help them build," he said to the virtual audience.

People are at the apex of the value chain at Zoho. Sridhar says successful businesses have to look at taking better care of their employees, and create a sense of belonging. He does this by encouraging people to work from their homes - to go back to the place where they feel connected and content with their surroundings.

“The biggest mistake, over generations, has been the abandonment of traditions to take on large cycles of debt to live in cities. Now, by living close to their towns, they can get back to farming, serve their temples, mosques, and churches, and continue their regular work. Their children can be homeschooled..," Sridhar had earlier said in a conversation with YourStory.

"Transnational localism" is Sridhar's underlying philosophy for everyone building at Zoho. It refers to a mindset that's global, but rooted in tradition and local culture - this is how one of India's most influential entrepreneurs plans to not only build products that the world can adopt, but also defines the 'future of work' across the world.

"If you go to Chennai, Mumbai, Pune, you'll realise that majority of the talent pool in metros does not come from there; it comes from small towns and rural areas. Japan, South Korea, and China have all already capitalised on this untapped talent pool," he said.

Zoho today boasts of around 40 world-class apps, including Zoho Desk which was built in a village in Tamil Nadu, validating the startup's vision that India can build world-class products from anywhere in the country.

It recently won the Aatmanirbhar Bharat App Innovation Challenge, and bagged the first place in the business and office category. The 25-year-old company serves the SMB and CRM market with cloud applications, and boasts a customer base of 50 million users worldwide.

To learn more and engage with Sridhar Vembu and other prolific innovators, join us at TechSparks 2020 now!

TechSparks - YourStory's annual flagship event - has been India's largest and most important technology, innovation, and entrepreneurship summit for over a decade, bringing together entrepreneurs, policymakers, technologists, investors, mentors, and business leaders for stories, conversations, collaborations, and connections that matter. As TechSparks 2020 goes all virtual and global in its 11th edition, we want to thank you for the tremendous support we've received from all of you throughout our journey and give a huge shoutout to our sponsors of TechSparks 2020.